Over the course of the last couple of years, I’ve been taking Spanish classes to help me, well, learn Spanish.  In the past, I’ve taken language courses in French, German, and even Japanese, but they’ll do me little good as I’m prepping for my move to Bolivia.  If I would have only known to make a different decision back in 7thgrade… c’est la vie.

I started with a school here in Denver, where my Spanish lessons were held at a local coffee shop, once a week.   It was good, and I learned the basics surrounding sentence structure and vocabulary.  They say that the older you get, the harder it is to learn a language.  I would have to agree with that comment; or maybe it’s just me.

Any who, that lasted for about four months, then I lapsed for about a year until we finalized our pilot project in November 2017.  After that project was completed, and we spoke about me moving to Bolivia, the classes started back up immediately!  I’ve been taking a private tutor (Edgar, who was my “profesor” the year before), which has helped me tremendously to take the next steps.  A picture of Edgar and his boys are below; he’s a good dude. 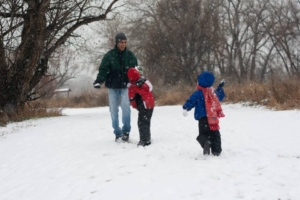 As far as I’ve come, I still have a WAYS to go.  I have the fundamentals down, but now have signed up for immersion classes when I get to Bolivia.  There are a few language schools in La Paz that are available to expats, and I plan on starting one pretty much the day I get in-country.  This work is A MUST, since the biggest barrier for me will be language.  As most people know, it’s difficult to build relationships when you can’t speak with them.

If I happen to see you before I leave, and you want to speak Spanish… please speak slowly.  🙂